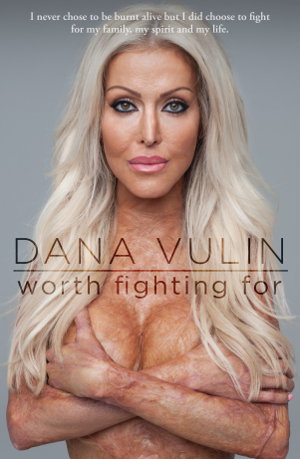 Worth Fighting For by Dana Vulin

A truly remarkable woman's story of survival, strength and triumph in the face of unspeakable horror.

In the early hours of a February morning in 2012, Dana Vulin was the victim of a hideous, unprovoked attack. A woman who'd been stalking and harassing her for weeks - incorrectly and baselessly thinking Dana was having an affair with her estranged husband - burst into her apartment, doused her with methylated spirits and set her alight.

Dana's fight began that day. She had to fight for survival, to battle against the third-degree burns that had consumed her body. She had to fight to regain her identity, being the faceless 'girl behind the mask' for years and with her scars rendering her almost unrecognisable. And she had to fight for justice, to see her attacker convicted and sentenced for this gruesome crime.

Despite the damage that the fire caused, Dana's spirit and sheer determination were not and cannot be destroyed. Showing that she is stronger than hate, stronger than fear, she has fought blood, tears and unimaginable pain to be where she is today. And now she wants to pass on to others the thing that sustained her through her darkest hours- hope.

Worth Fighting For is a powerful and moving story of this amazing woman's battle for survival against unbelievable evil and pain.