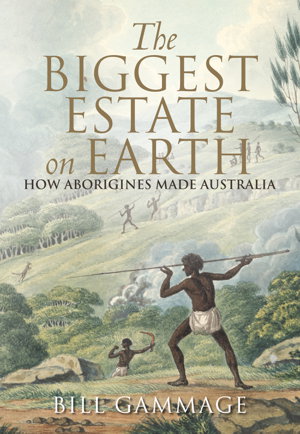 Biggest Estate on Earth How Aborigines made Australia by Bill Gammage

Across Australia, early Europeans commented again and again that the land looked like a park. With extensive grassy patches and pathways, open woodlands and abundant wildlife, it evoked a country estate in England. Bill Gammage has discovered this was because Aboriginal people managed the land in a far more systematic and scientific fashion than we have ever realised.

For over a decade, Gammage has examined written and visual records of the Australian landscape. He has uncovered an extraordinarily complex system of land management using fire and the life cycles of native plants to ensure plentiful wildlife and plant foods throughout the year.

Bill is one of the founders of Boffins and has selected the books we stock since the store began in 1989. It’s a job that he loves. His favourite reading is history, with psychology, current affairs, and business books coming close behind. He’s very fussy with fiction, with a rule that if a novel hasn’t earned his attention by page 50 then it’s time to start a new one. Magic realism causes him great anxiety, and of course he’d never agree with you if you said that is because he’s an earth sign.

I first came across Bill Gammage in the late 1970s when I read his myth busting The Broken Years: Australian Soldiers in the Great War.

The Biggest Estate on Earth was a revelation when it first came out. Very few of us were in any way aware of the complexity of Aboriginal land management before this book. We thought that early colonial paintings showing meadows and parks did not actually depict how the land appeared at the time; rather we thought that the colonial painters of the time styled their work to reflect the landscapes from their British homeland. Gammage looked past this, and through his researches he uncovered the extraordinarily complex system of land management using fire and the life cycles of native plants to ensure plentiful wildlife and plant foods throughout the year. The land really did look like a park at the time of colonisation! And that was because Aboriginal people managed the land in a far more systematic and scientific fashion that we had ever realised. This is a seminal work, and a decade on is still a bestseller.