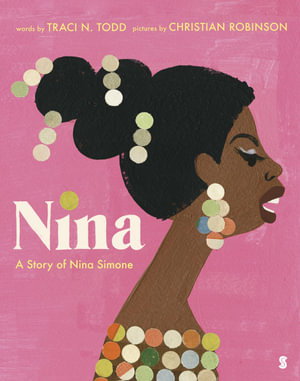 This illuminating and defining biography from bestselling author Traci N. Todd, with illustrations from award-winner Christian Robinson, tells the story of Eunice Waymon, who grew up to become Nina Simone - and shares her bold, defiant, and exultant legacy with a new generation.

With passion and unparalleled skill, Traci N. Todd and Christian Robinson bring this iconic singer's story to young readers and their families. Meet young Eunice, who sang before she could talk, and journey with her from the piano stool she shared with her father in her childhood home, to the bars and concert halls where she became the one and only Nina Simone.

Learn about how Nina's voice started out rich and sweet but grew to a thunderous roar as the Civil Rights Movement gained steam. Witness this artist in all her brilliance, singing in protest against racial inequality and discrimination. With rhythmic prose and masterful images, Nina perfectly demonstrates the relationship between art and activism. An essential addition to every young reader's library.

'Todd's telling shines in this skillfully paced portrait of Eunice Kathleen Waymon - more widely known by her stage name of Nina Simone - which traces her journey from a piano-playing child in North Carolina to later years as a performer, protest song pioneer, and civil rights activist. In an elegantly told story, Todd interweaves Simone's encounters with racism throughout, eventually paralleling Simone's experiences with concurrent events during the civil rights movement ... Caldecott Honoree Robinson contributes distinctive, carefully constructed vignettes of Simone rendered in acrylic paint, collage, and digitally in a predominantly earth-toned palette ... An engaging, affecting, and powerful biography that aptly situates Simone's enduring legacy in musical and social history. Back matter includes more about Simone and a bibliography.'

'Nina Simone's beauty and talent is given prominent expression by multi-award-winning Robinson in this picture-book biography ... while Todd's prose eloquently tells her story from childhood to fame ... A worthy biography for all collections and especially for those that serve music-loving children.'

'The narrative includes details of the love and support of family and community that gave Nina her early start, the disappointments and humiliations she suffered because of racism, and the determination and sheer love of music and of her people that carried her to success despite the setbacks. Todd's musical prose allows readers into Nina's perspective, and Robinson's scenes and portraits absolutely sing with energy, keeping pace perfectly with the text as it expands beyond typical picture-book length. Do not miss this complex story of an American legend.'