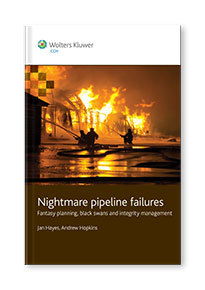 The worst nightmares of the oil and gas pipeline industry have come true in the US. High pressure gas pipelines run underground through many suburban areas, posing an immense but largely unrecognised threat to the general public. In 2010 in San Francisco, one of these pipelines ruptured, causing a massive explosion and fire.

Eight people died, many were injured and 38 homes were destroyed. This possibility haunts many cities around the world. The pipeline company was fined 2.5 billion dollars. Coincidentally in the same year, another worst case scenario came true, in the state of Michigan. A pipeline rupture released vast quantities of oily sludge into a local river system. The smell was so offensive that many nearby residents were forced to sell their homes and get out. The clean-up cost the pipeline owner a billion dollars, making it the most expensive pipeline oil spill in US history. This book is about the human and organisational causes of these two accidents. It identifies the lessons and suggests ways that such accidents can be prevented. In addition, it discusses the failure of pipeline regulation in the US and the need for regulatory reform.