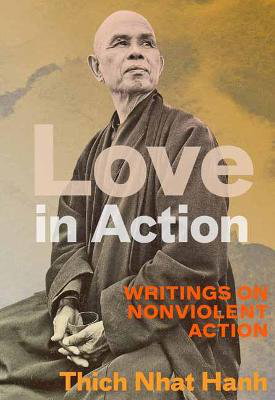 "The essence of nonviolence is love," Thich Nhat Hanh says. "Out of love and the willingness to act selflessly, strategies, tactics, and techniques for a nonviolent struggle arise naturally." Collecting sixty years of Thich Nhat Hanh's thinking on social transformation, Love in Action is an important resource for anyone engaged in social work, community organizing, political action, and cause-oriented movements.

Reflecting on the devastation of war, Thich Nhat Hanh makes the strong argument that ethics and altruistic love based on mindfulness and insight are the only truly sustainable bases for political action. Having played a central role in the Buddhist nonviolent movement for peace in Vietnam during the 1960s and serving as Chair of the Buddhist Peace delegation to the Paris Peace Accords in 1973, Thich Nhat Hanh speaks with the voice of experience- "There is no way to peace. Peace is the way."

Rich with essays selected from sixty years of writing on the connections between outer engagement and the inner work for peace, this anthology also features poetry and the script of the hauntingly beautiful 1972 play, The Path of Return Continues the Journey.The play's characters are drawnfrom the author's own life, the young men and women of his School of Youth for Social Service--many of whom were killed for their social actions."At 12-30 a.m. on July 5, 1967, in the village of Binh Phuoc, Gia Dinh Province, a group of strangers abducted five young men, brought them to the bank of the Saigon River, and shot them," reports Thich Nhat Hanh. "All five were volunteer workers in the School of Youth for Social Service, a nonviolent organization that sought only to heal the wounds of war and reconstruct the villages."An elegy and a prayer for peace, the script shows a less-known side of the young Thich Nhat Hanh- grieving, profoundly in touch with his sorrow and pain, and channeling his anguish into art, inspired by love.