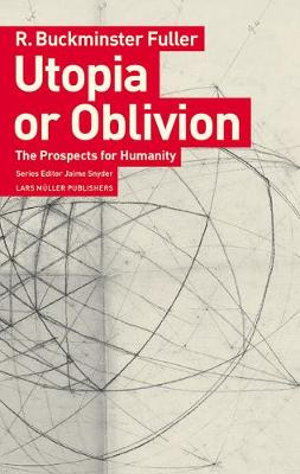 Utopia or Oblivion: The Prospects for Humanity by R Buckminster Fuller

A classic of utopian literature, more urgent than ever: Buckminster Fuller's provocative blueprint for the future. Composed of lectures given by Buckminster Fuller throughout the world in the 1960s, Utopia or Oblivion presents the thesis that humanity, for the first time in its history, has the opportunity to create a world where the needs of 100% of humanity are met.

Fuller's grandson, in the introduction, refers to this selection as "hardcore Bucky," as these essays display Fuller's investigations into mathematics, geometry and how they intersect with the arts, music and world peace. In Fuller's words, "This is what man tends to call utopia. It's a fairly small word, but inadequate to describe the extraordinary new freedom of man in a new relationship to universe - the alternative of which is oblivion. First published in 1969 and then reprinted by Lars Muller in 2008, Utopia or Oblivion also includes one of the earliest published discussions of Fuller's World Game, a revolutionary "game" that set as the goal for players, that the world "works" for 100% of humanity to nobody's disadvantage. It challenged players to overlook traditional world units such as nations, states and other political and economic divisions. AUTHOR: Fuller was born in Milton MA, taught at Harvard and MIT, and in the late 1950s he became a professor at Southern Illinois University (SIU), where he and his wife lived in a geodesic dome when he was in residence. In 1972 he was named World Fellow in Residence to a consortium of universities in Philadelphia, including the University of Pennsylvania. He retained his connection with both SIU and the University of Pennsylvania until his death. SELLING POINTS: . R Buckminster Fuller 1895 1983)[ was an American architect, systems theorist, author, designer, inventor and futurist. Fuller published more than 30 books, coining or popularising terms such as "Spaceship Earth", "Dymaxion" house/car, ephemeralisation, synergetic, and "tensegrity". He also developed numerous inventions, mainly architectural designs, and popularised the widely known geodesic dome. . Back in print! Originally published in 1969 and reprinted by Lars Muller in 2008, these transcripted lectures found the basis for Fuller's utopian vision. 32 b/w illustrations