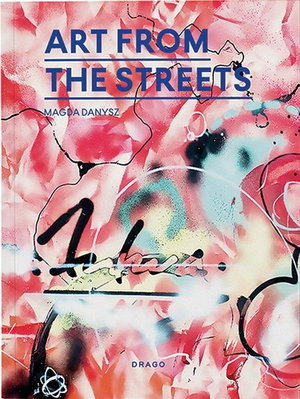 Art From The Streets by Magda Danysz

This exhibition catalogue from renowned street art expert Magda Danysz introduces the reader to the most important street artists worldwide, offering an overview of the most important styles and techniques. With her own gallery having operated between Shanghai, London and Paris for the last decade, Danysz uses her expertise to shine a spotlight on urban art in Southeast Asia for the first time.

The catalogue presents exciting new talents, such as Felipe Pantone, whose work is also featured on the book cover. New works - created for the show and featured in the book - illustrate the vitality and diversity of the Street Art movement and its relevance today. Magda Danysz is a Paris, Shanghai and London based curator specialising in emerging scenes, from new media to urban art. She opened her first gallery space in Paris in 1991. Since then she has opened art spaces and offices in Shanghai (2008) and London (2015). Apart from organising a programme for the exhibitions spaces she runs, Danysz has also curated and produced many other cultural projects with municipalities or museums across the world, including JR in 2010 at the Shanghai Biennale, and the Power Station of Art Museum Shanghai in China, 2014. She has also curated shows for the CAFA Art Museum in Beijing; a show about Chinese Contemporary Photography, at Tokyo Photo in Japan; the Street Generation(s) exhibition at La Condition Publique, Roubaix in France; etc. She has participated in more than 100 exhibitions worldwide and is also keen on publishing books about art. She has written various art books, including her 400 page Anthology of Street Art and Les Bains-Residence d Artistes, about an artist residency project in the heart of Paris. Danysz has also taught cultural policies at Sciences Po Paris. She is on the board of the cultural digital arts center 'Le Cube' in Issy-les- Moulineaux. In 2007, she was decorated by the French ministry of culture as a Chevalier des Arts et des Lettres. SELLING POINTS: Presents the world's most iconic street artists for the first time in Southeast Asia Tracing 40 years of Street Art There are two different available covers from Futura and Pantone Work by Banksy, Tarek Benaoum, Stephane Bisseuil, Blade, Crash, Speak Cryptic, D*face, Fab 5 Freddy, FAILE, Shepard Fairey (aka Obey), Futura, JR, L Atlas, Ludo, M-City, Miss. Tic, Nasty, Eko Nugroho, Felipe Pantone, Quik, Lee Quinones, Blek le Rat, Rero, Remi Rough, Andre Saraiva, Seen, Seth, Invader, Sten Lex, Tanc, Hua Tunan, Yok & Sheryo, YZ, Zevs and many more. 287 colour images