Boffins Books and the City of Perth Library are delighted to host Holden Sheppard and Craig Silvey for the release of Holden's latest book 'The Brink'.

A group of teenagers on schoolies find themselves confronting life-changing tragedy head-on in this electrifying novel by an award-winning YA author.

A group of school leavers free at last, ready to party, expectations high.  And even though a remote island on the Western Australian coast wasn't exactly the plan, they're not going to let that hold them back.

Leonardo, geeky, asthmatic, shy and prone to anxiety, has landed with them.  He's terrified he's definitely not part of the cool gang.  Super high-achiever Kaiya is trying to forget her frustration with her drug-addicted sister as well as dealing with pressure from the popular girls to lose her virginity.  Mason, footy jock with the physique to match, is coming to terms with his secret desire for his best mate, Jared.  And Jared wants a week off from his relationship with Val so he can have sex with as many girls as possible.

But the party takes a dangerous turn when Val is drugged and a man is found dead on the beach.  Blame, fear, mistrust, coverups, power plays and dark secrets tear the group apart and expose the deadly tensions beneath the surface.  And each teen is forced to confront demons that will lead them either to devastating tradegy or transformative triumph.  Whoever survives the week will never be the same again.

The Brink is a raw, powerful novel that pulls no punches in its authentic exploration of masculinity, sexuality, mental health, drug and alcohol use, relationships and sex.  Holden Sheppard takes the teenage experience to the next level.

Can't make it?  We'll happily have a copy of Holden Sheppard's 'The Brink' signed for you.  Simply contact us via phone, email, online or visit us in-store and we'll take care of the rest.

Holden Sheppard is an award-winning author born in Geraldton, Western Australia.  His debut novel, Invisible Boys (Fremantle Press, 2019), was published to both critical and commercial success.  Invisible Boys won the WA premier's Prize for an Emerging Writer, was shortlisted for the Victorian Premier's Literary Awards and was named a Notable Book by the Children's Book Council of Australia.  The novel is currently in production as a television series. 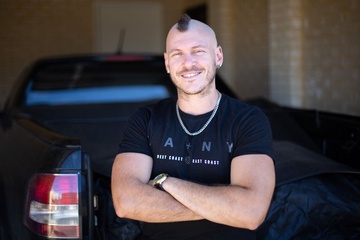