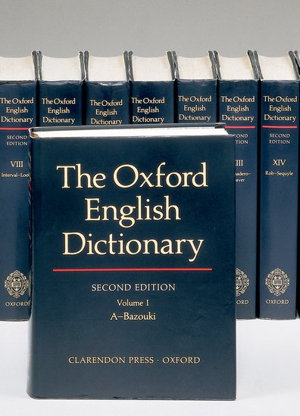 The Oxford English Dictionary is the ultimate authority on the usage and meaning of English words and phrases, and a fascinating guide to the evolution of our language. It traces the usage, meaning and history of words from 1150 AD to the present day.

No dictionary of any language approaches the OED in thoroughness, authority, and wealth of linguistic information. The OED defines over half a million words, and includes almost 2.4 million illustrative quotations, providing an invaluable record of English throughout the centuries. The 20-volume Oxford English Dictionary is the accepted authority on the evolution of the English language over the last millennium. It is an unsurpassed guide to the meaning, history, and pronunciation of over half a million words, both present and past. The OED has a unique historical focus. Accompanying each definition is a chronologically arranged group of quotations that trace the usage of words, and show the contexts in which they can be used. The quotations are drawn from a huge variety of international sources - literary, scholarly, technical, popular - and represent authors as disparate as Geoffrey Chaucer and Erica Jong, William Shakespeare and Raymond Chandler, Charles Darwin and John Le Carre. In all, nearly 2.5 million quotations can be found in the OED . Other features distinguishing the entries in the Dictionary are authoritative definitions of over 500,000 words; detailed information on pronunciation using the International Phonetic Alphabet; listings of variant spellings used throughout each word's history; extensive treatment of etymology; and details of area of usage and of any regional characteristics (including geographical origins).