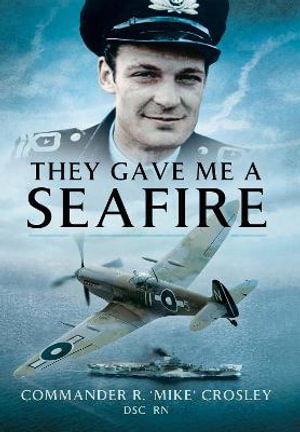 They Gave Me A Seafire by Crosley 'Mike'

A classic in every sense of the word, the re-issuing of this book is sure to provoke an enthusiastic response. First published in 1986 by Airlife, its publishing history has seen a great number of glowing reviews generated, coming from both historians and participants in the proceedings that the author so eloquently relays.

The book charts Crosleys service career in the Fleet Air Arm during the entire period of the Second World War. Part of his service saw him in action aboard HMS Eagle, flying Sea Hurricanes on the Harpoon and Pedestal Malta convoys of June and August 1942. It was during this time that he shot down his first enemy aircraft and survived the dramatic sinking of HMS Eagle. From there he graduated on to Seafires, (the Naval equivalent of the Spitfire), and flew this type in Combat Air Patrols over Norway and ramrod strikes from Operation Torch (the invasion of French North Africa in November 1942), through to D-Day in June 1944 in the European Theatre of Operations, and then in the Pacific abroad HMS Implacable as part of the British Pacific Fleet in 1945 until the end of the Pacific War, by which time he had command of his own combined squadron, 801 and 880. The narrative is well written in a frank and often scathingly critical way of Fleet Air Arm operations during the Second World War and beyond. The book looks set to bring the endeavours of Crosley to a whole new generation of enthusiasts, and it should appeal across the board to fans of aviation, naval history and families and friends of Armed Forces, past and present. AUTHOR: Commander R. 'Mike' Crosley, DSC, RN, was born in Liverpool in 1920. His operational history with the Fleet Air Arm saw him complete up to 3 sorties a day in the period 1942-45. His capacity for survival and sheer skill as a pilot were remarked upon at the time, and he secured a number of decorations, including DSC and Bar. Upon his retirement from the Royal Navy in 1970, he became a Physics teacher in Devon and the Isle of Wight. Following the release of They Gave Me A Seafire in 1986, he went on to write Up In Harm's Way: Flying With the Fleet Air Arm, first published in 1995 by Airlife, and re-issued by Pen and Sword Books in 2005. He died in 2010, aged 90. He received a posthumous Arctic Star in 2013. 50 b/w photographs