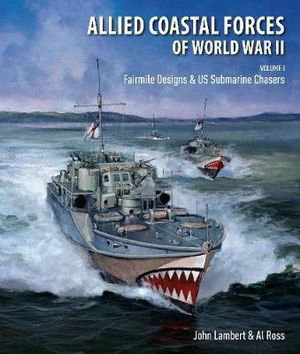 The major contribution made by Coastal Forces to the Allied war effort has had surprisingly little coverage in the literature of the Second World War. Motor torpedo boats, PT boats, motor gunboats, launches and submarine chasers served with distinction throughout the War, and in every theatre.

They performed invaluable service as patrol boats, convoy escorts, minelayers and minesweepers, harbour defence vessels, light landing craft, RAF rescue boats and transports for agents and clandestine missions. Allied Coastal Forces, now a recognised classic work and first published in 1990, remains the only publication to deal comprehensively - in words, photographs and drawings - with the technical detail of all these boats. Design, construction and subsequent development are all covered, and the builders, construction lists, fates and the technical data are given for each type. Separate sections cover armament and equipment, sea-going qualities and habitability. This first volume covers all the designs of the Fairmile Marine Company (including those craft built and equipped for Canada), together with the 72ft Harbour Defence Motor Launch and the US Navy 110ft subchaser. The authors, firmly established as the recognised authorities on small warships, unearthed a remarkable body of information now included in this major work, and their finely detailed drawings, redrawn form original builders' plans, offer an unparalleled view of all these remarkable designs. The new editions of their work will be welcomed by naval enthusiasts and modellers alike. AUTHORS: John Lambert spent nine years in the Royal Navy where he acquired his detailed technical knowledge of warships. His subsequent research on small warships and naval weaponry, combined with his remarkable technical drawing skills, led to the creation of a body of work some of which is displayed in this volume. He died in 2015. Al Ross II is the author of several books on small warships and since the 1980s has been producing a series of plans for modellers of small combatants of the Second World War and Vietnam eras. He lives in Bangor, Maine, USA. 160 b/w photographs, 400 line drawings, 12 colour camouflage schemes