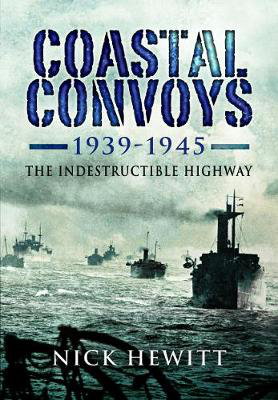 Using official records from the National Archives personal accounts from the Imperial War Museum and other sources, Coastal Convoys 1939 - 1945: The Indestructible Highway describes Britain's dependence on coastal shipping and the introduction of the convoy system in coastal waters at the outset of the war.

It beings to life the hazards of the German mining offensive of 1939, the desperate battles fought in coastal waters during 1940 and 1941, and the long struggle against German air and naval forces which lasted to the end of the Second World War. Reference is also made to the important role played by coasters during the Dunkirk evacuation in 1940 and the Normandy landings in 1944. AUTHOR: Nick Hewitt is the resident naval historian onboard HMS Belfast, the IWM's floating naval museum. His academic credentials include an MA in War Studies, specialising in Naval History from King's College, London. He has organized three major exhibitions on Belfast in the last four years and is an experienced broadcaster and speaker. 32 b/w images